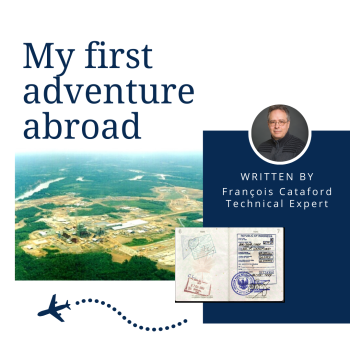 Written by François Cataford, Technical Expert
All for that!

In 1999, a multinational automation company approached me to repair a SCADA application in a pulp and paper mill. The next week, I’m sitting on a plane heading to the city of Sumatra in Indonesia... for a one-month contract.

Business class flights of more than 18,000 kilometers and 26 hours of flight time alone. Business class with Cathay Pacific... nothing to do with Air Sardines to Varadero!

What do you do when you have to wait eight hours at Hong Kong's brand-new airport? Enjoy the private lounge which offers showers and a library! Despite a typhoon warning, I still left the airport to walk a few hours downtown. With the majority of shops closed, the city was almost deserted. Who can boast of having visited Hong Kong without inhabitants...?!

It was there that I had my first culture shock: Quebec singer Bruno Pelletier singing Notre-Dame-de-Paris on TV5.

They take me to the wood yard area, a little way from the main factory. There, I am installed in the control room in front of a very, very ordinary computer that might as well end up in someone’s home! The application does not work well, the communication is super slow.

I'm being moved to a new workspace... I unplug the computer from the control room, reconnect it to my new room... and zzzip! A delicate smoke rises above the computer! The computer was purchased in Montreal, where the outlets are 110 volts. In Indonesia, the standard current is 220 volts. Unfortunately for me, only the control room sockets had been converted to 110 volts, but nowhere else in the factory (including my new room)!

Since it's 1999, I had to wait a week for the computer power supply to be repaired.

Often, in these projects, the accommodations are located near the factory. There is a "very good" village for expats who are there for a long time, another "good" village for visitors, and typically Indonesian buildings with walls of planks built on the ground and holding a roof, for the workers.

My room had a bathroom with a squat toilet (“Turkish toilet”) shared with the neighbor... I will say no more.

Transportation to the canteen and accommodations were carried out with shuttle buses... There were no bugs, just chickens, goats and buffaloes walking around. We were usually awakened by the sound of roosters and by the muezzin!

The project engineers' offices and the control room were in another part of the plant. To get there, we had to take a shuttle bus and pass through the entrance of the plant which was always guarded by the police and the army. 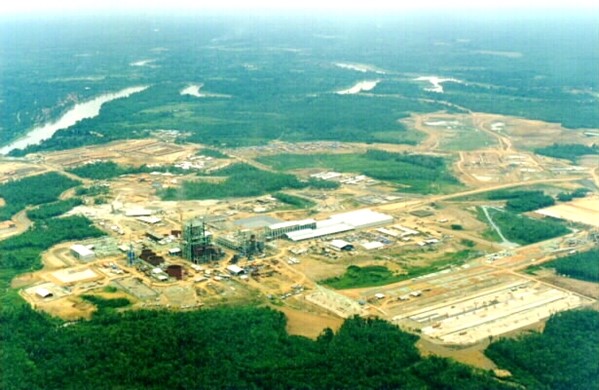 Aerial view of the factory

In the process that I was summoned to work on, tree trunks were to be reduced into chips. Like a food processor that slices carrots, but bigger. The cutting disc had to weigh several tons, it was driven by two huge engines, and we had to change its knives every 45 minutes. There was no emergency stop for this machine. If someone were to fall in there, there would be nothing left... When the process was in operation, it made a very hellish noise.

In 1999, the process control applications for PCs were called HMI (Human-Machine Interface). They mainly displayed the states of a process, alarms and allowed the operator to execute simple commands such as starting and shutting down engines or opening and closing valves. It was also possible to display trend charts with a rudimentary historian. Interactions with databases as we see today were certainly not common!

At this factory, the app used was Monitor Pro on Windows 95. It was an application that was derived from US Data's "Factory Link" and that worked on DOS. It was also sold by Modicon under the name "Unicell PC"… Schneider Electric eventually acquired the company and took the opportunity to rename the software.

At that time, computers were not very efficient and all the details in a control application were important. In this specific application, the reading of the variables from the PLC was read in a table, in alphabetical order. The communication driver would read the state of a variable at the designated memory address, then move on to the next variable at another address that could be in another block far removed from the previous variable. This reading was very ineffective.

The solution that I implemented was simply to change the table of variables to sort them by address!

All this adventure for half day of work.